HEADLINING: The Gold Souls
The Gold Souls are bringing the driving grooves of funk, the rich textures of soul, and the compelling storytelling of the blues to the Northern California scene and beyond. Drawing from a variety of influences and experiences, they deliver captivating lyrics and fresh arrangements over a vintage sound.
Led by the dynamic Juniper Waller, the group is made up of young talent hailing from the Bay and Sacramento areas. With Darius Upshaw on guitar, Alex Severson on the keys, Billy D. Thompson on the drums, and Jace Dorn on bass, each member has a hand in writing and song composition, making The Gold Souls a truly collaborative effort.
The Gold Souls burst on the Sacramento music scene in early 2017, and are swiftly becoming one of the most promising new talents in the area.
They released a self- titled five-song EP in May of 2017 and went on a tour down the California coast soon after. Their next single, Nobody, was released in late 2017 and was featured on Apple Music Blues Hot Tracks list. They released their full-length album Good To Feel in June of 2018.
Their next single, True Blue was produced/engineered by multi-Grammy winner Timothy Bloom and was released in February of 2019. This past April the band went on tour through southern California, Arizona, New Mexico, Texas, and New Orleans.
The Gold Souls are now working on their new album. Their latest single, Strongman came out in August of this year. The Gold Souls are a band to track in 2020! Dance floors will be filled!

OPENING: Elevation
Elevation featuring J Silk is a high energy funk/rock band from Northern California. Their original music was born in the clubs and bars of Grass Valley, Nevada City, and Auburn. They are a jam band and a dance band with an emphasis on heavy bass lines and funky grooves. The smooth vocals of frontman J Silk and singer Brynn Farwell give Elevation a fresh sound that's both old school and modern. They released their first album in October 2018,  "ELEVATION featuring J Silk," the tracks were recorded live in the studio to keep that live feel and unique sound. The band's motto...ELEVATE YOUR FUNKIN LIFE! Currently, the band is taking time to work on their second album, release sometime 2019.

The Oddfellows Hall features a wonderful vibe and a large wooden dance floor centered in the heart of Nevada City's vital and energetic downtown area.  Don't miss this event!
This event is presented by Boomerang-Beat Collaborative 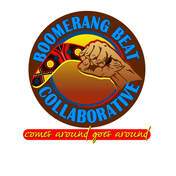